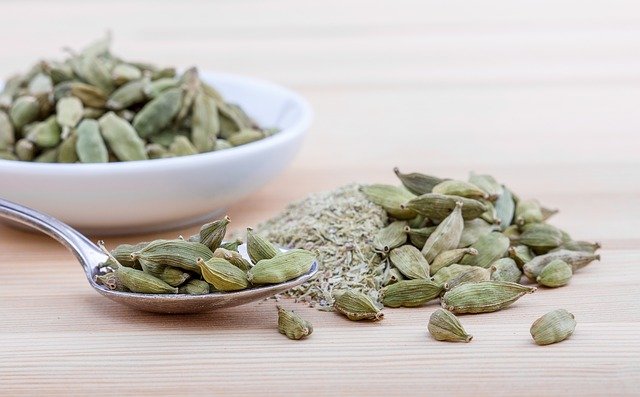 Cardamom is a spice with a distinctive green seed-like shape that is often found in Japanese supermarkets.

Originally from India, cardamom is used as an essential spice for baking in Northern Europe.

Cardamom is added to many Scandinavian sweets, such as the Swedish specialty cinnamon rolls and the traditional Finnish sweet bread, Pulla

In this article, I would like to introduce the characteristics and history of cardamom.

Cardamom is a type of spice native to India and Sri Lanka.

It is a standard spice in curry, and many people have heard of it.

Cardamom is often thought of as a curry spice, but it is also a spice that frequently appears in Scandinavian home cooking.

In Scandinavia, it is mainly used in baking.

For example, cardamom powder is often kneaded into the dough for Swedish cinnamon rolls.

The name cardamom is derived from the Greek word “kardamomon.”

By the way, cardamom is often thought to be the most produced in spice powerhouse of India.

Cardamom, the queen of spices

Cardamom is harvested as immature green berries. It is then dried for a while and sold in stores.

The black seeds inside the green skin of cardamom are used as a spice.

Cardamom, a member of the ginger family, is characterized by its tangy, spicy, and refreshing aroma.

Because of its exotic aroma, cardamom is also called “the queen of spices.”

Cardamom is also the third most expensive spice in the world after saffron and vanilla.

One theory interprets the name Queen of Spices to mean that the price is upscale.

There are records of cardamom being used as a spice and herbal medicine as far back as BC. It is therefore known as one of the oldest spices in the world.

In India, its country of origin, cardamom has been valued as an herbal medicine used in Ayurveda since prehistoric times, more than 1,000 years BC.

Elsewhere in ancient Egypt, cardamom was called “holy incense smoke” and was used as incense for prayers in temples.

It is said to have been introduced to Europe around the 2nd century. In Europe, cardamom was used in cooking and as an antidote.

And in Scandinavia, cardamom was first brought by the Vikings as spoils of war.

The Vikings were pirates who invaded and traded in Western Europe between the 8th and 10th centuries.

It is said that cardamom was acquired by the Vikings when they raided the city of Constantinople (now Istanbul, Turkey) and brought it to their homeland, the Scandinavian peninsula.

Cardamom is used for its mellow aroma in a wide variety of dishes, from familiar curries to meat dishes, stews, and ethnic cuisines.

In Scandinavia, cardamom is often used not only in regular home cooking but especially in baking.

A typical example is the cinnamon roll, Sweden’s national pastry and a must-have accompaniment to coffee in Fika.

When making cinnamon rolls, Swedes knead cardamom powder into the dough and bake them.

Then bake them open and fluffy, sprinkle cinnamon powder on top, and your cinnamon rolls are ready.

Cardamom powder is sprinkled on top of the baked dough instead of cinnamon, which is called a “cardamom roll.”

While cinnamon rolls have a sweet aroma and are easy for children to eat, cardamom rolls have a more mature taste with a bit of a tangy flavor.

Cardamom, which has a long history of use as an antidote and other herbal medicines, is still used today as more than just a culinary spice.

In Scandinavia, it is customary to put a small amount of cardamom in the mouth after drinking alcohol to treat bad breath.

The refreshing aroma of cardamom helps to alleviate the unpleasant smell of alcohol.

By the way, the spice Fennel is also used in a similar way. Fennel is often found in Indian curry restaurants.

Like cardamom, fennel also has deodorant properties, and the traditional Indian practice of chewing fennel after meals to eliminate bad breath is also practiced.

In Japan, it is also customary to drink green tea containing catechins, which have deodorant and sterilizing effects, after meals.

If you have the opportunity to go out drinking, try cardamom as a natural breath freshener.

Cardamom was brought to Scandinavia by the Vikings and has become an indispensable spice for making cinnamon rolls and other Scandinavian sweets and dishes.

It can be easily purchased at supermarkets, so please try it in your next cooking.

Advent: A month of Christmas prepara...

Vaxholm Island: Harbor town that was...