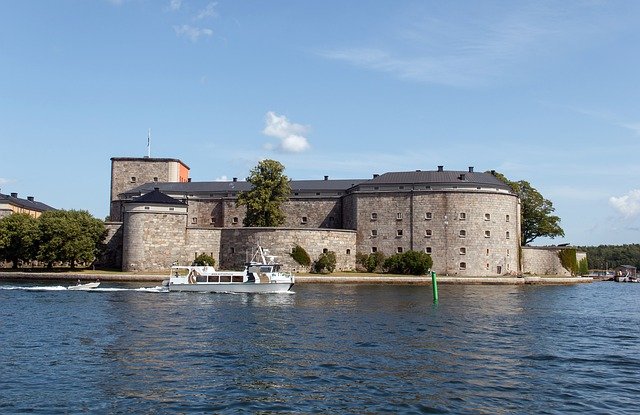 In the Baltic Sea, east of Sweden, there is a place called Vaxholm Island in the Stockholm archipelago, which consists of 24,000 islands of various sizes.

The island of Vaxholm is a tourist resort that many people visit by ferry from Stockholm.

However, until the 19th century, the island served as a military base for defending the inner city of Stockholm, and the fortifications used at that time remain today.

In this article, I would like to introduce the Swedish island of Vaxholm, which has a mix of colorful, beautifully colored streets and robust fortifications.

The island of Vaxholm, located 20 km northeast of Stockholm, Sweden, is a harbor town built at the entrance to the Baltic Sea.

There are approximately 24,000 islands in the open Baltic Sea, collectively known as the Stockholm Archipelago.

And the island of Vaxholm introduced here, is one of the islands belonging to the Vaxholm archipelago.

Located on the main route from the Baltic Sea to the city of Stockholm, Vaxholm Island is now known as a resort destination for both domestic and international tourists.

However, Vaxholm Fortress was originally built in the 16th century as a defense base to stop foreign enemies from invading Stockholm.

Vaxholm Fortress as a military base

The island of Vaxholm is located along the sea route leading from the Baltic Sea to Stockholm.

Because of its location, from the 16th to the 19th century, Vaxholm Island served as a maritime fortress to defend the capital city of Stockholm against invading powers from across the sea.

On the eastern side of Vaxholm Island is Vaxholm Fortress, with its solid outer walls and armed with cannons and other weapons.

The first fortress on Vaxholm Island was built in the 16th century, and today’s Vaxholm Fortress was built more than 150 years ago, in 1863.

It was once a strong fortress that defended the sea route to Stockholm, but now that it has served its purpose, it is open to the public as the Vaxholm Fortress Museum.

The museum exhibits cannons and shells from that era, as well as military documents describing successive Swedish battles.

Resort area visited by many people

Armed and fortified to prevent invasion by the enemy, the island of Vaxholm probably had the rough atmosphere of a front-line military base a long time ago.

Today, however, the island has transformed from a battlefield defense base to a popular resort destination with colorful streets and a peaceful, cheerful atmosphere.

Ferries and boats come and go on the vast Baltic Sea, and the island is crowded with wooden houses, cute cafes, and handcraft stores.

The island of Vaxholm is easily accessible from Stockholm, only about an hour’s ferry ride away.

It can be reached by land by bus or car, but the best way to get there is by ferry, which offers a view of the city of Vaxholm from the sea.

Vaxholm Island is hardly a shadow of its former military base and is now a resort with an idyllic atmosphere.

On sunny days, many people can be seen sitting on the terraces of cafes, leisurely enjoying Fika while sipping on coffee and pastries.

Cardamom: The queen of spices brough...