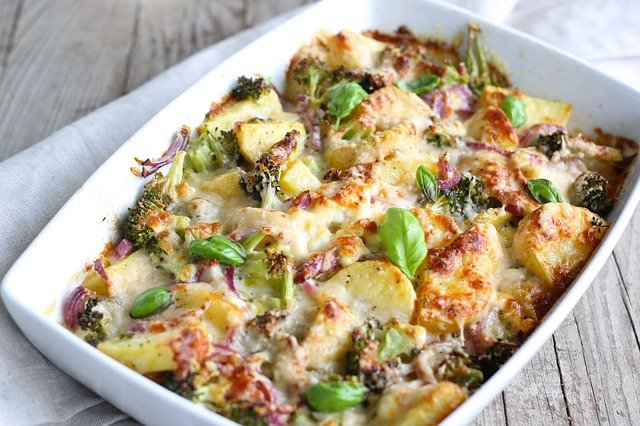 In Finland, there is an oven dish called Casserole, which is similar to gratin.

A casserole is characterized by a simple recipe in which you put vegetables, meat, fish, macaroni, rice, or other ingredients of your choice in a heatproof container and bake it in the oven.

Because of its ease of preparation, it is a popular and convenient recipe that comes in handy in Finnish households when they are busy.

This article will take a more in-depth look at Casserole, which is easy to prepare & rich in nutrients.

If you are interested in Finnish home cooking or are looking for a quick recipe, take a look.

What is a casserole?

The casserole is a type of oven dish in which chopped vegetables, meat or fish, rice, cheese, and other ingredients are placed in a heatproof container such as a pot or gratin dish and baked in the oven.

Casseroles are oven dishes that originated in North America.

However, due to its ease of preparation and volume, it has become a frequent dish in Finnish households.

A recipe for a deep-bottomed oven dish filled with ingredients of your choice and baked in the oven may be similar to a gratin.

Casseroles, on the other hand, offer a wider range of recipes than gratins, using not only vegetables and cheese but also rice, pasta noodles, and sweeteners such as syrup.

The recipe for casserole is very simple. Basically, you just fill a pot with the ingredients you want to eat and heat it in the oven.

After baking in the oven, the entire container can be served directly to the table, eliminating the need to transfer it to a plate and reducing the number of dishes to be washed.

Casseroles are also very useful when you want to dispose of leftover food in the refrigerator.

In Japan, many people can dispose of excess food altogether by making vegetable stir-fries or meat and potatoes.

The short, simple, and nutritious nature of casseroles matches the Finnish way of life and is the reason for the popularity of this dish.

Finnish families are more gender-equal, and many of them have two working parents. Therefore, they do not spend much time cooking for themselves.

Hot food is eaten only for dinner, and breakfast and lunch are simple dishes such as leftovers from the previous day or sandwiches.

The fact that Finns often cook in one-pot meals or the oven may be a reflection of their desire to save as much time and effort as possible in cooking.

That’s why casseroles have become a favorite in Finnish households for their simple recipes, abundant vegetable intake, and refrigerator stocking.

That’s why casseroles have become a favorite in Finnish households for their simple recipes, abundant vegetable intake, and refrigerator stocking.

A wide variety of recipes

The repertoire of casseroles is very large and diverse, ranging from vegetables and meat to seafood and macaroni.

For example, it can be sweetened with jam or syrup, or made creamy with cream.

There are as many variations of this dish as there are in Finnish families.

Rice is also widely eaten in Finland, as it is in Japan, and there is a doria-like casserole that includes rice with cheese and cream sauce.

Furthermore, casseroles are also served at Christmas dinner in Finland.

There are three main types of casserole traditionally eaten at Christmas in Finland: carrot casserole, potato casserole, and rutabaga casserole.

Carrots are so popular locally that they were used as a substitute for sweeteners in Europe before the spread of sugar.

Potatoes have also long been a staple food in Finland due to their high cold tolerance and preservation properties.

Carrot and potato casserole may be easy to imagine, but as for the ingredient “rutabaga,” you have probably never heard of it.

Rutabaga, also known as Swedish turnip, is a type of turnip native to Sweden.

Although rarely seen in Japan, rutabaga is a familiar ingredient in Scandinavia.

Rutabaga is often used as an ingredient in stewed dishes such as soups and stews because it does not easily fall apart.

Because of its sweet flavor, rutabaga is sometimes eaten raw in salads in Finland.

Etymology of the word casserole

But casserole is an English-speaking term, and the Finnish term is different.

Thus, in Finland, a casserole is called a “〇〇laatikko.”

It is said that casserole is called “laatikko” which means box in Finnish because the container for the ingredients resembles a box.

Casseroles are oven dishes that originated in North America in the 20th century.

It is said that the background of the birth of casseroles in North America is due to the spread of inexpensive heat-resistant containers to the general public in the early 20th century.

Another reason was that during the food shortages of World War I and the Great Depression, people liked the convenience of making it with ingredients they had in their refrigerators.

From the 1950s, as women entered the workforce and the number of working parents increased, casseroles became a popular home-style dish in North America that was easy and quick to prepare.

The casserole is a simple dish made by baking ingredients in a heatproof container.

Its simplicity has made it popular among Finnish families looking for a quick and easy way to prepare casseroles.

It can be quickly prepared using only the ingredients in the refrigerator.

It is also good for a wide repertoire of recipes, from meat and fish to rice.

Please try making it for your next dinner.