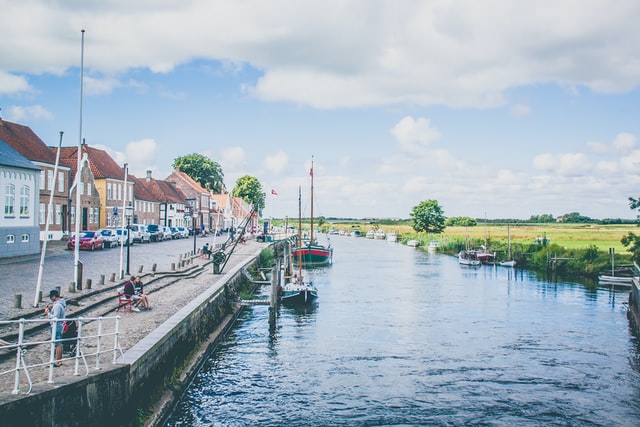 On the Jutland Peninsula in Denmark, there is a small town named Ribe.

Ribe is known as the oldest town in Denmark, and it was founded around the 8th century, more than 1000 years ago.

In this article, I would like to introduce the town of Ribe, Denmark, its history, and famous tourist attractions in the town.

The oldest town in Denmark

Ribe is a small town with a population of about 8,000 located in the southwestern part of Denmark’s Jutland Peninsula.

The town was founded by the Vikings in the early 8th century and is the oldest town in Denmark.

The name Ribe even appears in a document published in 845.

The charm of Ribe is the scenery of Denmark’s oldest town.

The entire town is paved with cobblestone streets and houses designed in colorful shades of red and yellow.

Everywhere you look in the town, you will find a charming scene typical of the fairyland of Denmark.

Once you enter the old town of Ribe, you will find yourself in a storybook world of traditional houses built of stacked bricks.

Some of the oldest houses were built in the 16th century.

Because of their historical value, the old town of Ribe and the Ribe Cathedral, which will be introduced later, is registered as Danish cultural heritage site.

Ribe offers not only a medieval townscape, but also a variety of cafes, general stores, and souvenir stores.

In the center of Ribe is the town’s symbolic church, called Ribe Cathedral. Like Ribe, this Ribe Cathedral is the oldest church in Denmark.

Ribe Cathedral is decorated in the Romanesque style, an architectural style that prevailed throughout Western Europe from the late 10th to the 12th century.

The massive stone walls, characteristic of the Romanesque style, and the solid and sturdy design give the church a presence befitting the oldest church in Denmark.

The unique design of the two buildings, one reddish-brown, and the other white are also impressive.

Ribe Cathedral is open to the public free of charge, and anyone can enter to take pictures and worship.

Ribe Cathedral also has a tower that can be climbed by stairs, from the top of which you can see the whole beautiful city of Ribe.

The Ribe River, once a busy trading river

At the time of its construction, Ribe was one of the most prosperous trading cities in Scandinavia.

One can feel the remnants of this history in the Ribe River, which flows quietly through the town of Ribe.

The Ribe River was once the city’s main trade route and teemed with ships.

The Ribe, once an important trade route, is now a place blessed with a tranquil riverside setting.

On holidays, it is a place of relaxation for citizens, where locals enjoy a leisurely stroll along the river.

In addition, markets are regularly held along the Ribe River from spring to summer.

Ribe was founded by pirate Vikings in the early 8th century and prospered as one of the leading trading cities in Northern Europe.

Today, the old town and Ribe Cathedral, founded in the 13th century, still attract many tourists who come to take a look at the spots where Denmark’s history is etched.

Ribe is about a four-hour train ride from Copenhagen, but the sight of the entire town, including the reddish-brown painted streets, is well worth seeing.