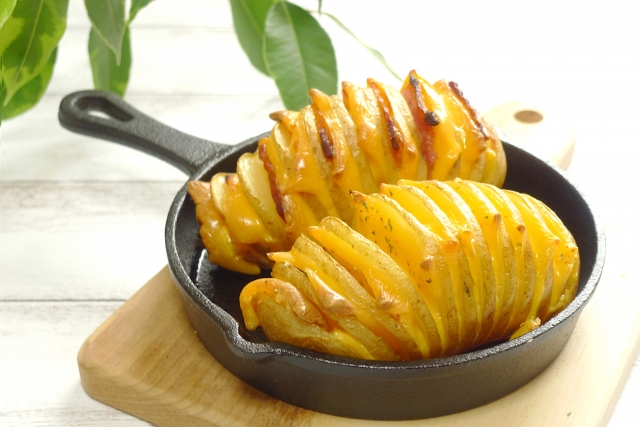 Hasselback potatoes, a Swedish specialty, are characterized by a slice that looks like the bellows of an accordion, a musical instrument.

The simplicity and wide range of recipes are also appealing, making it a well-known Swedish potato dish that is served in a variety of places, from Scandinavian homes to restaurants.

In this article, I would like to introduce you to Hasselback potatoes, which originated in Sweden and can be tried in the kitchen tomorrow.

Hasselback potatoes are a dish made by cutting potatoes into small pieces, sandwiching ingredients such as cheese and bacon between the pieces, and baking them in the oven.

Hasselback potatoes are said to have originated in Stockholm, Sweden.

And in Sweden, it is a popular dish that is eaten in a wide range of settings, from home cooking to restaurants.

Potatoes are a familiar vegetable in Japan, but in Sweden and other Scandinavian countries, potatoes have become such an indispensable ingredient on the dinner table that they are also eaten as a staple food.

The cool climate of Northern Europe is not conducive to the cultivation of wheat and rice as compared to other European countries.

Therefore, potatoes, which are cold-resistant and can be grown even in poor soil, have been traditionally eaten as a staple food as an alternative to wheat bread.

Because they can be stored for long periods of time, they were also an important source of nutrition for the Scandinavian people during the winter months when crops could not be harvested.

Even today, there is a wide variety of recipes using potatoes in Sweden, and potato dishes are always present on the family table.

The name of the Hasselback potatoes dish also comes from the “Hasselbacken Hotel and Restaurant” in Stockholm, Sweden.

In addition, combined with their unique appearance, Hasselback potatoes are also known as “accordion potatoes.”

It is recommended not only as a main dish but also as a side dish that blends perfectly with a wide variety of dishes, from meat to fish.

Cooking Hasselback potatoes is quite simple. You cut a vertical slit in the potato, place the toppings in between, and bake in the oven, and you’re done.

The ingredients to prepare are potatoes as the main ingredient and toppings such as butter, cheese, bacon, and sliced tomatoes.

Potatoes should be used with the skin on. Potatoes can have poisonous sprouts, which should be removed beforehand.

A common mistake people make when slicing potatoes is to cut the knife to the end.

When slicing a potato, you should not cut completely through the potato, but stop the knife at a depth just a little below the center.

As a way to get a good cut, it is easier if you place two chopsticks under the potato in advance to act as a stopper to prevent separation.

The best distance between slices is 2 mm to 5 mm. Thick slices leave a soft texture characteristic of potatoes.

On the other hand, thin slices give a crispy texture similar to potato chips. Adjust the distance between slices to your preference.

After that, soak in water for about 10 minutes to remove the scum, and then place more and more toppings in the slits.

When applying the olive oil and butter, use a brush, which is also used for brushing beaten egg on the surface of apple pie dough, to ensure even application.

When sandwiching other meats such as ham or bacon, lightly freeze them so that they will be cooked just right when heated in the oven.

The final step is to bake them in the oven at 200°C for about an hour.

As the potatoes are cooked, the slits will gradually open up like flowers, forming an accordion-like shape.

Also, the time is only a guide and depends on the size of the potatoes.

Take a look at them after 20 to 30 minutes and adjust the baking time.

The range of recipes is unlimited

One of the most appealing things about Hasselback potatoes is that they are extremely versatile in terms of recipe arrangement.

After cutting into the potato, you can add any ingredients you like as toppings, so you can freely vary recipes from Japanese, Western, to Italian.

For example, from the standard recipe of bacon, cheese, and black pepper, an Italian-style recipe with a generous coating of olive oil followed by cheese, sliced tomatoes, basil, and other herbs would be delicious.

As a flavoring herb, I recommend using rosemary, an herb that has already proven its compatibility with potatoes in the Rosemary Potatoes.

If you are interested in SNS, you might want to lay the potatoes in a stylish skillet pan and bake them in the oven.

Hasselback potatoes are easy for anyone to make, and in addition to cooking them at home, they have become a popular outdoor dish when camping.

When making Hasselback potatoes outdoors, place them in a Dutch oven and heat them over a campfire.

This way, you can enjoy them in a different way from the Hasselback potatoes you enjoy at home.

Hasselback potatoes, which originated in Sweden, have become popular because of the variety of recipes and the volume of the dish, despite the simplicity of the ingredients and cooking procedures.

I hope you enjoy cooking them at home as a lunchtime dish on your next holiday with potatoes and other ingredients for toppings.