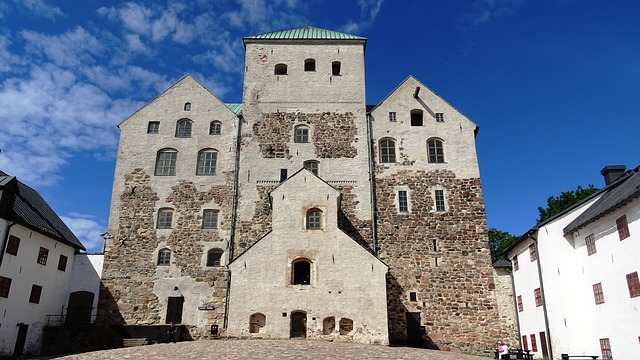 In southwestern Finland, there is a fortress called Turku Castle, which was built to defend the city of Turku, the former capital of the country.

Turku Castle was designed around 1280, when Finland was once a Swedish possession, and is also known as the oldest castle in Finland.

In this article, I would like to introduce you to this historic Turku Castle.

Turku Castle (Turun Linna in Finnish) is the oldest castle in Finland.

Turku Castle is located at the mouth of the Aula River in Turku, an ancient city in the western province of Suomi in southwestern Finland.

Turku was the capital of Finland until 1812, and even today, Turku is also known as the “Capital of the West of Finland.

Turku Castle was built in the former capital city of Turku around 1280, more than 700 years ago.

In the 13th century, Finland was ruled by neighboring Sweden.

Turku Castle was also built during the Swedish occupation as a fortress to defend Turku, the capital, from foreign invaders.

Turku Castle as a fortress

Turku played a central role in Finland’s political and economic life until 1812 when the capital was moved from Turku to present-day Helsinki.

And when Turku Castle was built in 1280, Finland was not an independent country as it is today, but part of Swedish territory.

Sweden used to be a powerful country that flourished as the “Baltic Empire” or “Swedish Empire” and ruled over the Baltic Sea countries in Northern Europe.

Turku, the capital of Finland, was also an important diplomatic and military base for Sweden, and Turku Castle was necessary for its defense.

Besides being a solid fortress, Turku Castle also served as a base for the Northern Crusaders.

The Northern Crusades was an organization formed by an alliance of countries belonging to the Catholic Church to conquer the non-Christian world as infidels.

In addition, the city has played many other roles in its long history, such as being used as the residence of the King of Sweden.

Today, it is a historical museum

The fortress was used to defend Turku, the capital of Finland, and is now open to the public as a historical museum that tells the history of Finland to future generations.

Inside the museum, visitors can see the architecture and facilities from the Middle Ages, including a chapel that is still used for weddings and a banquet hall that used to be a ballroom for medieval nobility.

Furthermore, since Turku Castle was built in the 13th century when it was a Swedish possession, the castle is unique in that it also preserves Swedish culture and decorative styles.

In addition, the castle exhibits art, costumes, furnishings, and other items of high historical value from different periods.

Not only the exhibits but also the intricate passageways, which are described by visitors as “like a maze,” are a highlight of the museum.

Turku Castle was a strong fortress that protected Turku, the ancient capital of Finland, from enemy invasion.

Now that it has served its purpose, it is a familiar architectural landmark that attracts visitors from Finland and other parts of Scandinavia.

Vaxholm Island: Harbor town that was...