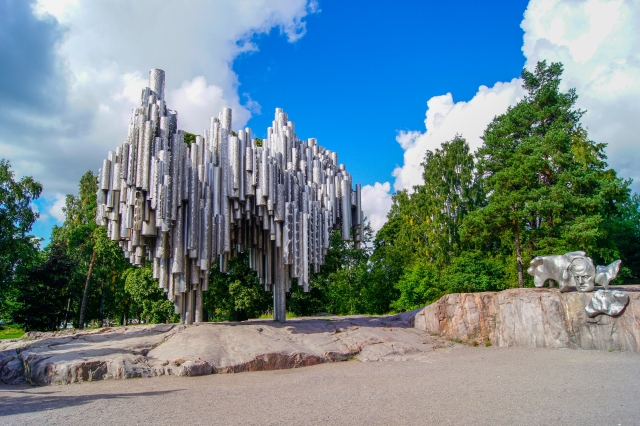 In Helsinki, Finland, there is a place called Sibelius Park, which is inspired by Jean Sibelius, who is regarded as one of Finland’s greatest composers.

Sibelius Park, with its white birch trees and seasonal flowers, is a place of relaxation for the citizens of Helsinki. The park is also famous for the original design of the monuments installed in the park.

In this article, I would like to introduce the features and history of Sibelius Park, a spot named after Sibelius, one of Finland’s most famous composers.

Sibelius Park (Sibeliuksen puisto) is located in the Töölö district of Helsinki, the capital of Finland in Northern Europe.

Sibelius Park was built to commemorate the 80th anniversary of the birth of Finland’s most famous composer, Jean Sibelius.

The predecessor park itself already existed, initially called “Hop Park,” which was established as part of the Helsinki Redevelopment Plan in the 20th century.

In 1945, the park was renamed to its current name, Sibelius Park, to commemorate the 80th anniversary of the birth of Jean Sibelius, who was then highly acclaimed and famous in Finland and abroad.

The pipe organ monument is the symbol

A landmark of Sibelius Park is a monument made of stainless-steel pipes placed on the north side of the park.

The monument, called the Sibelius Monument, was designed by female sculptor Eila Hiltunen and contributed to Sibelius Park in 1967.

The number of stainless-steel pipes used in the monument exceeds 600, with a total weight of approximately 2.4 tons.

Although it looks small in the photo, it is actually a rather huge monument, standing 8.5 meters tall.

There is enough space under the monument to accommodate a single person, and if you stand inside the monument and listen carefully, you can enjoy the echoes of the organ’s distinctive sound.

What catches the eye most is its unique shape.

The artistic design of the building, constructed from a large number of stainless-steel pipes, is sure to evoke a variety of images and impressions in the viewer.

According to its creator, Eila Hiltunen, the monument was designed with the image of a “forest” in mind.

The complex background of the sculpture of Sibelius’ face

The monument, with its creative design and cool stainless-steel texture, is a representative symbol of Sibelius Park and a photo stop for numerous visitors.

And besides the monument, the other symbol of Sibelius Park is the portrait of a human face.

It is said that the model for the sculpture’s face was Sibelius himself.

Although the portrait of Sibelius’ face is now a symbol of the park, there was actually a complicated situation surrounding the Sibelius Monument, which was introduced earlier, behind its installation.

The inorganic and uniquely formed monument of beauty that I mentioned earlier was not, in fact, accepted by everyone when it was first installed.

Of course, there were some positive comments, but it is said that there were also quite a few more criticisms.

The unique and elusive design of the work has led many to question and criticize its installation, saying, “It is too abstract to understand what it is expressing.

In response to such critical feedback, a sculpture of Sibelius’ own face was hastily added.

It is said that in order to fend off criticism directed at the monument, the artist placed a work featuring Sibelius’ face, which is more in keeping with the concept of the park.

Who is Jean Sibelius?

Sibelius was a law student at the University of Helsinki. However, he later turned to music and studied composition at the Helsinki Conservatory.

The music composed by Sibelius is characterized by many works expressing Finnish nature and folklore.

He left behind many masterpieces that are still listened to by the Finnish public today, including “Kullervo,” which was inspired by the Finnish folk epic “Kalevala,” and his signature symphonic poem “Finlandia.”

In particular, “Finlandia” is as well known in Finland as the national anthem and as a patriotic song.

When Sibelius published Finlandia, Finland was under the control of the Russian Empire.

It is said that Sibelius’ composition “Finlandia” brought together the consciousness of the Finnish people and galvanized them toward national independence.

Therefore, even today, more than 100 years after independence, his composition “Finlandia” has a special patriotic significance for the Finnish people.

Sibelius Park, located by the sea in northwestern Helsinki, is a park associated with the great Finnish composer Jean Sibelius.

A monument with a pipe organ in the park is also a unique spot. If you are a music lover, this is a park you should visit at least once.