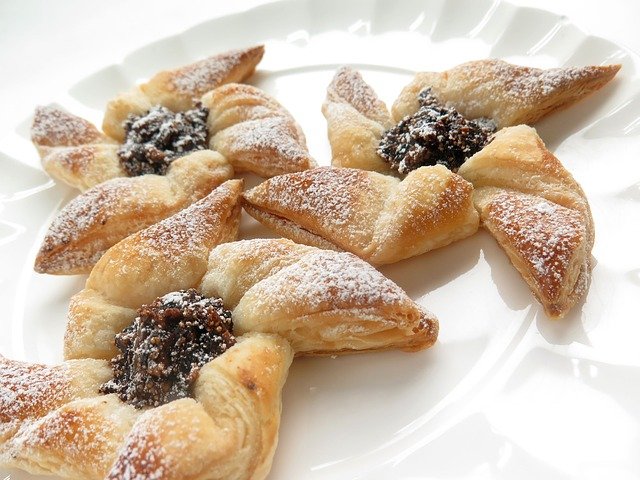 In Scandinavian Finland, known as the home of Santa Claus, there is a custom of eating a baked sweet called “joulutorttu” at Christmas time.

Joulutorttu is sweet with a lovely design featuring a star-shaped pie crust and prune jam placed in the center.

In this article, I would like to introduce in detail the Nordic Finnish pastry joulutorttu, which makes Christmas more festive.

Joulutorttu, a traditional pastry of Finland

“Joulutorttu” is a traditional baked sweet eaten during the Christmas season in Scandinavian Finland.

It features a star-shaped pie crust and prune jam served in the center.

The shape of the fabric is often compared to a star, but it may be more like a shuriken or windmill.

Joulutorttu is a Scandinavian Christmas sweet that is popular among men and women of all ages for the crispy light texture of the pie crust and the fresh, rich sweetness of the prune jam.

The name “joulutorttu” is a combination of the Finnish words “joulu,” meaning Christmas, and “torttu,” meaning tart.

Finland is known as the home of Santa Claus, the well-known Christmas character.

In Finland, the home of Santa Claus, there is no custom of eating Christmas cake at Christmas as in Japan.

The alternative to Christmas cake is joulutorttu, which is introduced in this article.

In Finland, joulutorttu is sold in cafes and bakeries throughout the city as the Christmas season approaches.

Many people also make it at home with their children, as it is a simple recipe of wrapping jam in pie crust and baking it.

If you make it at home, in addition to the standard prune jam, you can also try out different recipes by adding your own favorite jams such as strawberry jam, marmalade, or apricot jam.

During the Finnish Christmas season, families gather for dinner and joulutorttu, made with various shades of jam, is glamorously placed on the table.

The basic ingredients for joulutorttu are a commercial frozen pie sheet, jam to serve in the center, eggs, and finally powdered sugar to sprinkle on top.

The recipe is quite simple: first, make a total of four slits in the pie crust from the corners to the center.

Then place the jam of your choice, such as prune jam, in the center of the pie crust.

Next, I will introduce the process of making the unique star shape of joulutortorttu.

First, hold the edges of the pie dough in your hands. Then, you attach the four edges so that they are folded over in the center of the dough along the cutout you made in advance.

After folding, use a brush to brush the entire surface with egg yolk and bake in a preheated oven at 180°C for 15 to 20 minutes.

When the dough is fragrant and browned, remove it from the oven and finish by sprinkling powdered sugar all over it.

It may take some getting used to folding the pie dough, but once you get the hang of it, anyone can make it easily.

When making joulutorttu in the home kitchen, you can make the dough from flour and eggs if you are more particular.

If you are a beginner in pastry making, you can easily use a commercial pie sheet.

When using frozen pie sheets, remove them from the freezer in advance and bring them to room temperature.

In addition, prune jam is the standard jam for joulutorttu in Finland.

If you have difficulty purchasing prune jam, blueberry jam is a good substitute.

Or buy dried prunes commercially and blend them in a blender until they become a paste.

This way, you can easily make homemade prune jams.

It is said that during the Nordic Christmas season, the good smell of baking joulutorttu wafts from bakeries and homes all over Finland.

Spending a relaxing winter in a warm house while enjoying joulutorttu is the Finnish way to spend the winter.