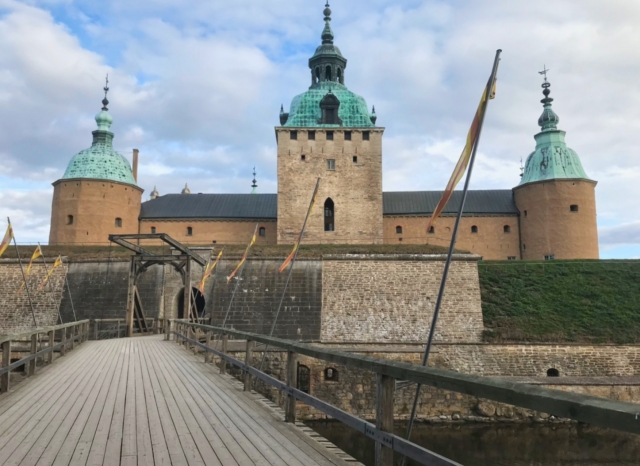 Kalmar Castle is a historic old castle that stands majestically on the coastline of Öland, an island in southern Sweden.

Kalmar Castle is also an important castle in the history of Scandinavia, as it was the site of the signing of the “Kalmar Union” in 1397, when Sweden, Denmark, and Norway formed an alliance.

Here you will learn about the purpose for which Kalmar Castle was built and its historical evolution.

If you are interested in Nordic history, please take a look.

Kalmar Castle is an ancient 13th-century castle located in the port town of Kalmar, adjacent to the majestic Nordic Baltic Sea.

It is one of the oldest castles in Sweden.

Kalmar Castle was built around 1200 by King Knut I of Sweden to defend the port city of Kalmar.

At the time, Sweden was threatened by pirates invading from the open sea, but the greatest threat to Sweden was Denmark.

Although Sweden and Denmark now have a good relationship as fellow Nordic countries, the two countries have fought many battles in their history.

Kalmar Castle is a fortress that was built by Sweden as a defensive stronghold to hold off a Danish invasion in the 12th century.

Kalmar Castle is a famous landmark

Kalmar Castle was built as a strategic point for defending the Baltic Sea.

Therefore, rather than being a castle with elegant decorations that show the prestige of royalty, it is characterized by its strategic functionality, such as its robustness, as a priority.

The bronze roofs and solid stone fortifications, though simple, give the impression of historical significance and dignity.

The guided tours are led by staff members dressed in costumes of the period, which is a nice service.

In addition, the Kalmar Castle exhibits items of high historical value, such as furnishings and household goods that were used.

The castle where the Kalmar Union took place

Kalmar Castle is famous as the site of the signing of the “Kalmar Union,” one of the most important alliances in Nordic history, on July 13, 1397.

The Kalmar Union was an alliance of the three Nordic countries of Denmark, Norway, and Sweden, led by Queen Margaret I of Denmark.

The name Kalmar Union comes from the fact that the signing site of the 1397 alliance was the Swedish city of Kalmar.

The Kalmar Union was signed to oppose the Hanseatic League in what was then northern Germany.

At its peak, the Hanseatic League was a city alliance of northern German cities, with more than 100 member cities.

The Hanseatic League rapidly expanded in size, forming an economic zone that dominated all of northern Europe, including the Baltic Sea region.

It was a very great threat to the Nordic countries at that time.

Thus, the Kalmar Union was concluded to strengthen the unity among the Nordic countries, with the Hanseatic League, an alliance of cities in northern Germany, as a common enemy.

Kalmar Castle is located in Kalmar, a city in the Småland region of southeastern Sweden.

The city of Kalmar was an important stronghold in Sweden from the 13th to 17th centuries as a fortified city with Kalmar Castle as its center.

Furthermore, since Kalmar Castle was originally built to defend the city against the enemy Denmark, it was involved in many battles during the medieval period.

For example, during the Kalmar War (1611-1613), when Denmark and Sweden fought for control of the Kalmar region, Kalmar Castle was besieged by the Danish army, resulting in numerous casualties.

From 1675 to 1679, Denmark declared war on Sweden to retake the Skåne region, resulting in the Skåne War, and the castle was subjected to an onslaught by Danish forces.

However, Kalmar Castle did not fall despite heavy attacks during the Kalmar and Skåne Wars.

On the other hand, the strategic importance of Kalmar Castle gradually declined as a result of the Treaty of Roskilde in 1658, which moved the border southward, and the establishment of a Swedish naval base in 1689 by King Carl XI of Sweden in the city of Karlskrona.

After losing its status as a military base, Kalmar Castle and the city of Kalmar later flourished as industrial cities.

After its role as a fortress, Kalmar Castle was also used as a brewery, grain storehouse, and prison from the 18th century onward.

In the 19th century and later, the building was restored to its present form, incorporating baroque features such as a bronze roof.

Today, the building is a historical landmark that tells the story of Sweden’s history, including the 14th-century Kalmar Union, to future generations.

Kalmar Castle is a famous old castle that was the setting for the Kalmar Union, which was formed in 1397 to oppose the Hanseatic League of northern German cities.

Although the castle is located more than four hours away from Stockholm, the capital of Sweden, it is a popular tourist attraction that attracts large numbers of visitors every year.