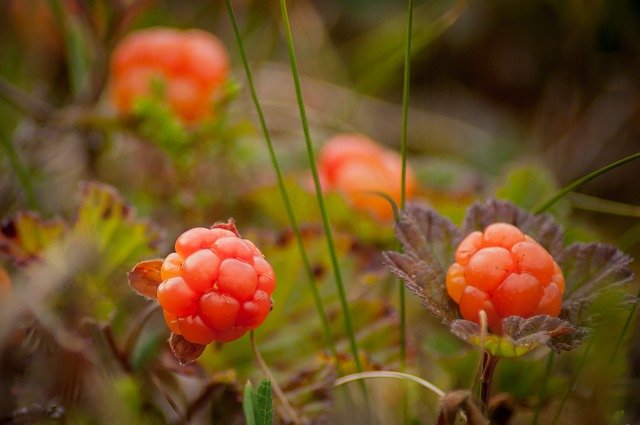 When it comes to the famous fruits of nature-rich Scandinavia, berries such as blueberries and lingonberries are often first on many people’s lists.

There are many types of berries other than the standard blueberry, and the “cloudberry” introduced here is one of them.

Cloudberry is not a well-known berry in Japan, but it is so famous in Scandinavia that it is used in the design of the 2-euro coin in Finland.

I would like to introduce you to some of the detailed features of Cloudberry.

Cloudberry is a species of berry that is classified in the same family as blackberries and raspberries, in the genus Raspberry of the rose family.

Its main habitat is the cold regions of northern Europe, including central and northern Finland.

Cloudberry grows wild in Japan and can be found in the subarctic region from Tohoku to Hokkaido.

And cloudberries, like blueberries and lingonberries, are berries that are actively eaten in Northern Europe.

Cloudberry has a soft pulp that can be easily crushed with your fingers, and you can enjoy its fresh sweet-sour taste.

For this reason, locals often eat them freshly picked and raw.

In Japan, cloudberry is also known by the Japanese name “holomui strawberry.

The reason for the name “holomui strawberry” is said to be because the first cloudberry was found in Japan in an area called Horomui, located in Iwamizawa City, Hokkaido.

If you look closely at the cloudberry fruit, you will notice that, unlike blueberries, which have a flat, shiny surface, the cloudberry has a unique, uneven shape, as if several small berries have gathered together to form one.

Cloudberry is also characterized by its bright amber-colored fruit.

In Northern Europe, cloudberries are in season from early summer (July) to late summer.

As the fruit gradually ripens after flowering in June, the hue of the fruit changes from green to red and then to a beautiful amber color.

When the fruit turns amber, the flesh is at its sweetest and softest, which is said to be the best time to harvest.

In Scandinavia, cloudberries are even called “Arctic gold” in reference to their bright amber-colored fruit.

In Finland in particular, the cloudberry is a widely popular berry, as is depicted in the design of the €2 coin.

Cloudberry is a luxury fruit even in Scandinavia

Cloudberry is a rare berry that is not often seen in Japan.

In fact, cloudberries are not an easily available berry even in Scandinavia and are one of the more expensive berries in the local Scandinavian market.

This is because the cloudberry season lasts only a very short time, from late July to early August.

In addition, cloudberry is a native berry that grows in swamps and other riparian areas, which is a more limited habitat than other berries.

Also, unlike other berries, it is difficult to cultivate by hand, so wild cloudberries are generally picked when harvesting.

In short, cloudberries are rare because of their short season, limited habitat, and the difficulty of growing and harvesting them, making them a relatively expensive berry even in Scandinavia, where berries are familiar.

Cloudberry jam, which is processed from fresh cloudberries, is also often used for slightly luxurious occasions, such as parties or to serve guests, rather than as an everyday jam to spread on bread at breakfast every morning.

A delicious way to eat cloudberries

Cloudberry is a berry that is often eaten fresh in Scandinavia because of its sweet and sour taste and soft flesh.

When you put it in your mouth, you can also enjoy the texture of the small seeds contained in the pulp.

Cloudberries are eaten fresh, and the surplus is frozen or processed into jam by boiling with sugar.

After the cloudberries are harvested, Scandinavian families cook them in a pot with sugar until the berries lose their shape, making a tender jam.

Like in Japan, jam is used to add sweetness to pancakes and waffles, or as an ingredient in the decoration of sweets.

Incidentally, lingonberries are also famous in Scandinavia, a berry used as a garnish for traditional Scandinavian dishes, including the Swedish specialty, meatballs.

However, lingonberries are sour when fresh, and are mainly used in jams and other processed foods.

Cloudberries are eaten raw, lingonberries are processed into jam, and a wide variety of berries are used in Scandinavian kitchens for different dishes and occasions.

To learn more about lingonberries, which have been eaten in Scandinavia for centuries, please take a look at this page.

I hope you have enjoyed this explanation of Cloudberry.

The brightly colored amber cloudberries will instantly brighten up your table just by adding them to your dining table.

Compared to blueberries and raspberries, cloudberry may still be a minor berry, but if you see cloudberry jam at an import goods store, please buy it.