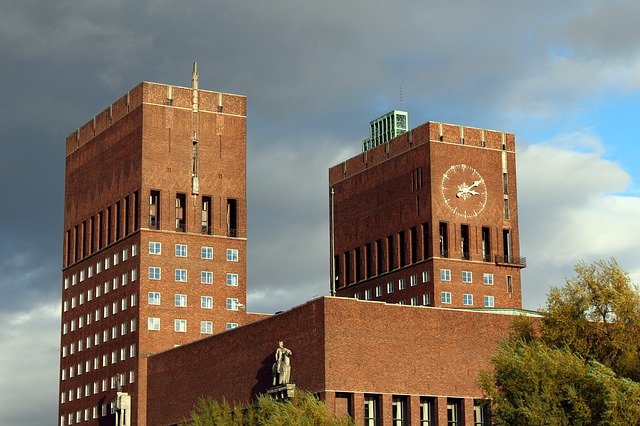 The City Hall is used for a wide range of purposes, from exhibiting the works of Norwegian artists to serving as the venue for the Nobel Peace Prize ceremony.

It was built in 1950 to celebrate the 900th anniversary of the founding of the city of Oslo.

Construction of the City Hall began in 1931 and was completed in 1950, interrupted by World War II.

The Oslo City Hall is also characterized by its modern and sophisticated design, which is different from the image we have of a city hall.

The building has a stately reddish-brown exterior, and two more buildings rise on either side of the entrance.

The interior of the building is also modern and palatial in form.

The modern design of the Oslo City Hall was created by Norwegian architects Arnstein Arneberg and Magnus Poulsson.

Numerous works of art displayed inside

The Oslo City Hall houses the City Council Chamber and the Oslo Mayor’s office and serves as the center of Oslo’s administrative operations daily.

While functioning as a government office, the Oslo City Hall also has many works of art on display, making it one of Norway’s most popular tourist attractions.

Oslo City Hall is a two-story building, and on the first floor is the Central Hall, where the Nobel Peace Prize ceremony is held.

The floor is marble, and the walls are decorated with magnificent paintings on the theme of Norwegian history that dates back to the Viking Age, giving the building the appearance of a museum.

There is also a gallery space where visitors can view ceramics and other works of art.

The gallery displays works by Norwegian artists such as Edvard Munch.

The wood carvings with motifs of Norse mythology on both sides of the entrance are also worth seeing. You will enjoy the works even more if you learn about Norse mythology in advance.

Every year on December 10, the Nobel Peace Prize is awarded at Oslo City Hall.

The Nobel Peace Prize is one of the Nobel Prizes awarded to individuals and organizations that have contributed to the reduction of armaments, protection of the environment, and improvement of world affairs.

The Nobel Prize is probably best known for the award ceremony held at Stockholm City Hall in Sweden.

However, of the six Nobel Prizes, the Nobel Peace Prize is the only exception, and it will be held at the Oslo City Hall in Norway.

The reason why only the Nobel Peace Prize is held in Norway is said to be because Alfred Nobel, the founder of the Nobel Prize, wished for lasting peace between Sweden and Norway.

Oslo City Hall is the administrative and self-governing office of the city of Oslo.

It is also the site of the Nobel Peace Prize and a famous tourist attraction, with various paintings and sculptures on display.

From the Oslo City Hall, visitors can enjoy a view of the Oslo Fjord that stretches all the way to the horizon.

It is perfectly accessible from the center of Oslo, so be sure to stop by during your visit to Norway.