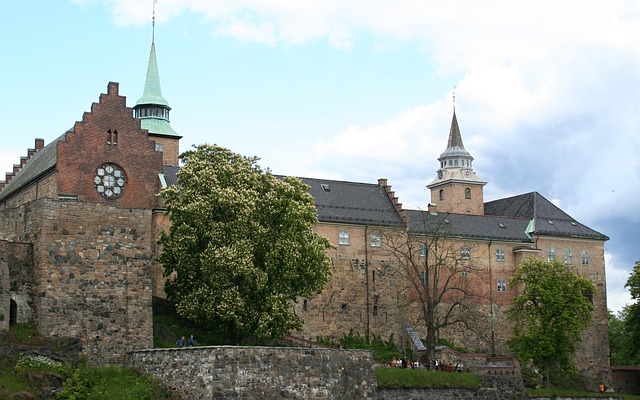 In Oslo, Norway, there is a fortress called the Akershus Fortress, which was built in 1299 to defend Oslo.

It is still used as a Norwegian military facility today and is an important spot in Norway’s history and military affairs.

In this article, I would like to introduce in detail the background of the birth of Akershus Fortress, the places to visit for sightseeing, and the fact that it served as a model for a famous animated film.

Akershus Fortress is a medieval fortress built on a hill overlooking Piper Bay in Oslo, the capital of Norway.

Akershus Fortress was built in Oslo in 1299.

It was built by King Haakon V of Norway to defend the capital Oslo, the administrative and economic center of Norway, against the invasion of Sweden and other foreign enemies.

And did you know that Akershus Fortress continues to be used as a Norwegian military facility in the 21st century?

The eastern side of Akershus Fortress houses the Norwegian Ministry of Defense and the headquarters of the Norwegian Defense Forces, which continue to protect Norway more than 700 years after its construction.

Built for the defense of Oslo

As mentioned earlier, Akershus Fortress was originally intended as a fortress for the defense of the capital city of Oslo.

Akershus Fortress was built in 1299 under the command of King Haakon V of Norway.

The background to this was the attack on Oslo in 1287 by Alf Erdlingsson, a Norwegian nobleman at the time.

This incident revealed the vulnerability of Oslo’s defenses, and plans for the construction of Akershus Fortress were hastily drawn up.

As the capital of Norway, Oslo was also an important center for the Norwegian economy and military in the 13th century.

In particular, Norway’s main industry, the maritime and shipping trade, was a pillar of the Norwegian economy, as it was during the Middle Ages as well.

Therefore, a strong fortification was necessary to defend the coastline, which was a key trade route.

Renovated into a modern palace in the 17th century

In the 17th century, it was remodeled into a modern palace in the Renaissance style by King Christian IV of Denmark.

The reason why the name of the King of Denmark is mentioned here is that Norway, together with Denmark and Sweden, had formed the “Kalmar Union” in 1397 under the leadership of Queen Margaret I of Denmark.

After Sweden withdrew from the Kalmar Union in 1523, the Danish-Norwegian confederation remained intact.

The breakdown of the Kalmar Union led to a state of war between Sweden and the United Kingdom of Denmark and Norway.

In other words, Akershus Fortress needed to be further strengthened to prevent a Swedish invasion, so King Christian IV of Denmark rebuilt the castle.

The renovations removed the traditional fortifications and added more modern fortifications to accommodate the weapons of the time, such as firearms.

The Kalmar Union is described in more detail in this article.

In the past, the Nazis took over

Akershus Fortress was built at the end of the 13th century and has been the site of many battles since then.

Akershus Fortress had been a defender of Norway for hundreds of years until the Second World War when it was finally taken over by the Nazis.

After the Nazi German invasion of Scandinavia, the Norwegian government abandoned the capital city of Oslo in 1940, and Akershus Fortress was also placed under Nazi control at that time.

During the war, the castle was used by the Nazis as an execution site for resistance fighters and prisoners of war in Norway.

Furthermore, after the war ended, there was a purge of war criminals in Norway who had sided with the Nazis.

Akershus Fortress as a tourist attraction

Much blood was shed at Akershus Fortress during the war.

Today, however, there is no dark shadow of war.

With its beautiful stone walls and green lawns, it has become a place of relaxation for Norwegian citizens.

Akershus Fortress is located on a hill, and from its ramparts, visitors can enjoy a panoramic view of the historic city of Oslo and the magnificent sea where ships pass by.

Except for official events, the castle is usually open to the public, and visitors can tour the interior, which still retains the appearance of its medieval past.

For example, there is a large hall where banquets were held, a chapel used for royal funerals, and a royal mausoleum where former Norwegian royalty are buried.

The castle also exhibits many medieval furnishings associated with King Christian IV, making it an excellent place to learn about Norwegian history.

On the other hand, there is also a dungeon in the castle that reminds us that it was a military fortress, and visitors can learn about the history of Akershus Fortress from a different angle than its elegant interior.

Model for Arendelle Castle in “Frozen”

Incidentally, Akershus Fortress is also famous as the model for Arendelle Castle in the 2013 Disney film Frozen.

Arendelle Castle appeared many times in the film as the castle where the main characters, Anna and Elsa, lived.

Many people may have wondered why Akershus Fortress looked so familiar when they saw it.

It is the model for Arendelle Castle in Frozen, and since the movie was released, many Disney fans have come to visit.

Akershus Fortress has played an important role in Norway’s military affairs from its birth in 1299 until now, more than seven centuries later.

As the setting of Norwegian history and warfare, and as the model for Arendelle Castle in “Frozen,” it has become a landmark with many facets.