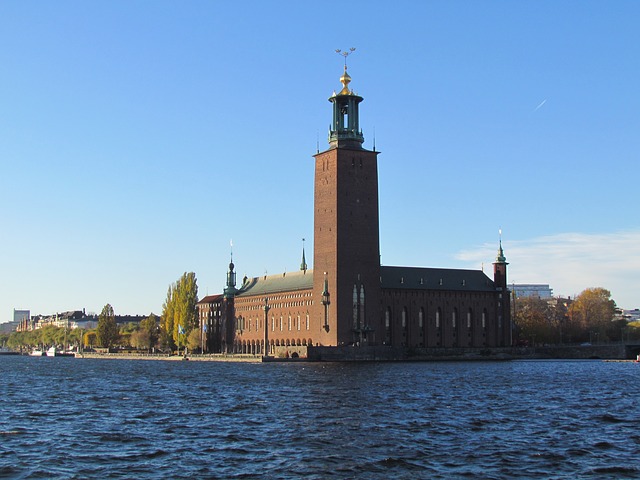 In Stockholm, the capital of Sweden, there is a building called “Stockholm City Hall,” which was built in 1923.

This Stockholm City Hall is a famous landmark in Sweden and is used as the venue for the Nobel Prize ceremony, which is held every year on December 10.

In this article, I would like to introduce Stockholm City Hall in Sweden in detail.

Stockholm City Hall is a reddish-brown brick building with a distinctive exterior that stands along Lake Mälaren in Stockholm, the capital of Sweden.

It is marked by its massive red brick exterior, bronze roof, and a golden monument glowing at the top of the tower.

The building is in perfect harmony with the cityscape of Stockholm, the city of water, also known as the “Venice of Scandinavia.”

Nine bells at the top of the tower are actually used. When it is time for the bells to ring, the beautiful sound of the echoes of the bell through Stockholm.

And the greatest feature of Stockholm City Hall is that it is the venue for the Nobel Prize Ceremony, which is held in Sweden every year on December 10.

Stockholm City Hall is widely known around the world as the building where Nobel Prize ceremonies, dinners, and balls are held.

By the way, among the Nobel Prize categories, only the Nobel Peace Prize is awarded at the Oslo City Hall in Norway.

This is because Alfred Nobel, the creator of the Nobel Prize, wanted both Sweden and Norway to have peaceful relations.

You can read more about Oslo City Hall in Norway in this article.

A building considered a masterpiece of 20th-century architecture

Construction of Stockholm City Hall began in 1909 by architect Ragnar Östberg and was completed 14 years later in 1923.

During construction, the building was designed concerning the Palazzo Ducale in Venice and other European countries.

A National Romanticism building expressing ethnicity and regionalism that was popular in the Nordic countries and the Baltic states at the beginning of the 20th century, Stockholm City Hall is hailed as a masterpiece of 20th century architecture.

Stockholm City Hall, known as the venue for the Nobel Prize award ceremony, is a popular tourist attraction that attracts many visitors every year.

The interior of Stockholm City Hall is only accessible when a tour guide is in tow.

There are several points of interest in the building, such as a restaurant in the City Hall, where visitors can enjoy the same menu that is served at the annual Nobel Prize banquet by making a reservation in advance.

You can also tour the city council chambers, where debates are held twice a month.

The wooden ceiling of the city council chambers uses the architectural techniques of the wooden ships of the Vikings, who invaded and traded along the coast of Western Europe between the 9th and 12th centuries.

The tower towering over Stockholm City Hall is also open to visitors only during the season from May to September.

The tower is 106 meters high, and at a height of 73 meters above sea level, there is a viewing platform from which visitors can enjoy a panoramic view of the Stockholm cityscape.

There are a total of 365 steps from the tower entrance, and for safety reasons, only 30 people can enter at a time.

From the tower of Stockholm City Hall, you can see the picture-postcard view of the world of Stockholm, which is formed from a total of 14 islands and is filled with colorful buildings.

Other views include the old Swedish town of Gamla Stan, located on the other side of Lake Mälaren, which leads to the Baltic Sea.

By the way, Gamla Stan was also the model for the Ghibli movie “KiKi’s Delivery Service”.

The Blue Hall, where the commemorative dinner will be held

The venue for the Nobel Prize Dinner held every December is a space called the “Blue Hall” in Stockholm City Hall.

The Blue Hall has a high, open ceiling and is surrounded by red brick walls.

Why is a room with a red brick floor called the “Blue Hall”?

As for the origin of the name “Blue Hall,” it was planned to paint the walls of the room blue when the Stockholm City Hall was first built.

However, the interior of the red brick was more beautiful than expected, and the backstory is that the application of the blue color was abruptly stopped, keeping the name “Blue Hall” in the conception stage.

Another architectural feature of the Blue Hall is the blue-gray cobblestone pavement.

At first glance, the floor may look plain for a dinner party venue.

However, the floor is designed to be subdued in order to emphasize the color of the evening gowns of the female participants when they get off their evening dresses at the dinner party.

“Golden Hall” was used for the ball

A ball is also held at the Nobel Prize Ceremony, and the Golden Hall, located on the second floor of Stockholm City Hall, is used as the venue for the ball.

The Golden Hall is covered with mosaics with gold leaf on all the walls, giving the interior a palatial splendor.

The amount of gold leaf used is said to be as much as 19 million pieces.

Built-in 1923, Stockholm City Hall is a popular tourist attraction in Sweden that has been used as the venue for the world-famous Nobel Prize Ceremony.

It is only an 8-minute walk from Stockholm Central Station, making it a great place to visit when sightseeing in Stockholm.

Bellevue Beach: Designed by Danish a...