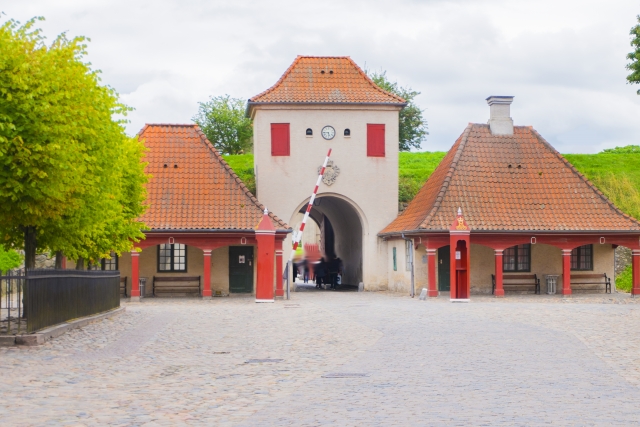 Kastellet Fortress is a spot built in the 17th century for the purpose of protecting Copenhagen, Denmark, a prosperous port city in Northern Europe.

While it is now used as a military facility, it is open to the public free of charge for citizens to relax and enjoy the park on the grounds.

In this article, I will explain in detail the features and history of the Kastellet Fortress, one of the most famous landmarks in Copenhagen, Denmark.

Kastellet Fortress with the star-shaped outline

Copenhagen is the capital of Scandinavia’s Denmark, and its colorful cityscape is like a fairy tale world. Located in the middle of the city is the Kastellet Fortress, which I will introduce in this article.

Copenhagen, with its port city aspect of a port town where ships pass by, was strategically located to prevent foreign enemies from invading across the sea.

Therefore, Kastellet Fortress was built in 1662 as a fortress to defend the capital, Copenhagen, at the entrance to the open sea.

Looking at the overall view of Kastellet Fortress from above, the entire perimeter of the fortress is surrounded by a moat, forming a star-shaped outline.

According to one theory, the reason for this unique shape, which looks like a star or even a starfish, is to reduce blind spots by building walls in all directions, so that a wider area can be watched.

The fortress was built for the defense of Copenhagen harbor

Since ancient times, Copenhagen has been called the “Gateway to Scandinavia” and “Merchant’s Port” as a hub of maritime traffic.

The Port of Copenhagen, with its large number of vessels, was also an important location for trade with foreign countries and for the defense of the capital against foreign enemies.

Thus, for geographical and military reasons, Kastellet Fortress was established at the entrance and exit of Copenhagen Harbor, facing the open sea for defense.

The architectural plan for Kastellet Fortress was proposed by King Christian IV of Denmark in 1626.

After the death of Christian IV, his son Frederick III took over the construction project, and the present Kastellet Fortress was completed in 1662.

The construction of the Kastellet Fortress was done by a Dutch architect named Henrik Ruse.

Since its completion, Kastellet Fortress has also been called “Frederikshaun Fortress” after King Frederick III of Denmark.

Thus, Kastellet Fortress, built in 1662, served as a military base to defend Denmark and Copenhagen for many years.

Even after completing its role as a fortress, some of its facilities, such as cannons, are still in place.

Now a peaceful park open to the public

Kastellet Fortress once served as a defense base for Copenhagen, but today it is used as a park for the citizens of Copenhagen to relax and enjoy the abundant nature.

The buildings on the fortress grounds are used as facilities for the Danish military, such as the garrison.

The public is also welcome to enter the grounds free of charge and enjoy walking and sightseeing in the park.

As a pleasant park surrounded by a moat with calm water and beautiful greenery, Copenhageners can be seen running or taking a leisurely stroll along the well-maintained walkway along the star-shaped path during the daytime.

Kastellet Fortress is now open to the public as a park, and the park on the grounds is called Churchill Park.

Many people may have heard of Churchill, but the person Churchill Park is actually named after is Winston Churchill, the former Prime Minister who commanded Great Britain in World War II.

Why is the name of a foreign country, former British Prime Minister Churchill, used for the park at Kastellet Fortress in Denmark?

In fact, Denmark was occupied by Nazi Germany during World War II and was liberated from occupation by British troops in the past.

Thus, in gratitude to the British for rescuing it from Nazi rule, the Kastellet Fortress was named Churchill Park after the British Prime Minister at the time.

Kastellet Fortress was built in 1662 to defend Copenhagen, the capital of Denmark, from foreign attacks.

Today it still has the appearance of having served as a military fortress, but it is also a popular place for Copenhageners to spend their vacations, strolling along the star-shaped paths.

Snow Hotel: A Mysterious Hotel in No...