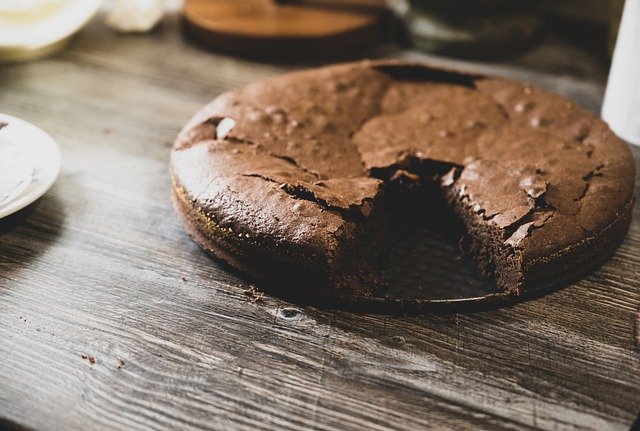 In Sweden, there is a chocolate cake called kladdkaka.

Kladdkaka means “sticky cake” in Swedish, and as the name suggests, the moist, mouth-watering sponge dough is an attractive sweet.

In this article, I will explain the Swedish-style chocolate cake, kladdkaka.

Kladdkaka is a chocolate cake commonly eaten in Sweden.

The typical characteristic of kladdkaka is its molten cake batter inside, similar to the French baked cake fondant chocolat.

In contrast to the savory, crispy surface, the inside is not fully cooked, leaving it moist and gentle to the palate.

The reason for this is that kladdkaka does not use any baking powder or other flours that are commonly used in other cakes.

Since the cake is simply made by mixing ingredients and baking, it does not have the fluffy texture of a shortcake, but rather a unique, floppy dough.

Kladdkaka began as a failed cake

There are several theories as to how kladdkaka came to be eaten in Sweden.

One popular theory, for example, is that kladdkaka originated from a failed cake made in a Swedish home.

In 1938, near the end of World War II, someone was trying to bake brownies in the kitchen of a Swedish home.

Baking powder is essential for baking cakes, but due to the political situation at the time, baking powder was not available in the recipe because its distribution had been reduced.

Therefore, the bakers mixed the ingredients as they were and baked it, but since they did not add baking powder, the dough naturally did not expand and a floppy chocolate cake was the result.

However, the brownie-like cake, which was a failed cake, was surprisingly tasty and gradually began to be made in other households.

Another reason may have been that the recipe was simpler than other sponge cakes, so even baking beginners and children could make it easily.

This is how the moist and tender chocolate cake without baking powder became the kladdkaka of today.

The recipe for kladdkaka is almost the same as for a regular chocolate cake, except that baking powder and other expanders are not used.

In Sweden and other Scandinavian countries, chocolate itself is not used in the recipe when making chocolate confections.

Instead, unsweetened cocoa powder is commonly used to add color and flavor to the chocolate.

First, warm the butter in a pan to melt it.

In a bowl, mix the eggs and sugar, gradually adding the flour and cocoa powder.

Then, coat the molds with the previously melted butter and pour the dough into the molds. Then bake in a preheated oven at 170 degrees Celsius for 20 minutes.

The key to the kladdkaka recipe is not to cook it completely, but to leave it somewhat rare.

Therefore, once baked for 20 minutes, try piercing the dough with a skewer to check the inside.

If the dough is still raw and sticks to the skewer, cook it for an additional 2 to 3 minutes.

Finally, let it cool slightly after baking in the oven, sprinkle powdered sugar on top, and it is ready to serve.

You can top with ice cream or cream if you like.

Chocolate cake has become one of the most popular cakes both in Japan and in Sweden.

Please try making Swedish kladdkaka on your next holiday, which is different from the familiar sponge cake and is characterized by its moist texture.

The Troll's Tongue: A spectacular sp...