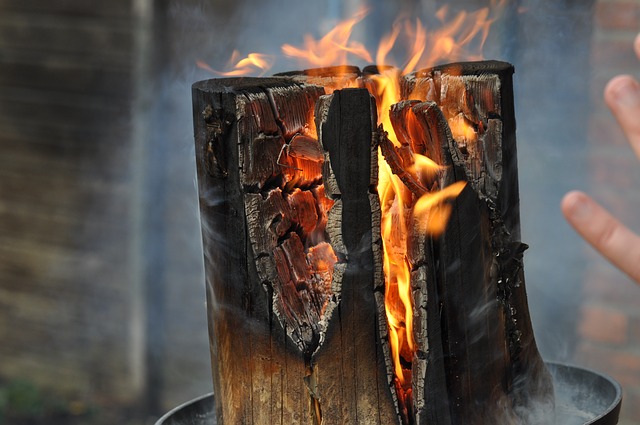 The Swedish torch is a type of campfire that has become popular in camping and other outdoor activities.

It is characterized by its wild and dynamic use, in which a log with a slit in it is ignited directly.

The name “Swedish torch” tends to make people think that it originated in Sweden, but in fact, it is said to have originated in Finland.

In this article, I would like to introduce the Swedish torch, which is sure to bring a lot of excitement when used in camping.

A “Swedish torch” is a type of fire that is ignited by lighting a log perpendicular to the ground.

It is classified as a self-feeding fire that does not require additional wood.

As will be explained in more detail later, the Swedish torch was used by Swedish soldiers in the 17th century as a campfire in the field, hence the modern name Swedish torch.

Other times they are called wood candles because of their appearance.

The Swedish torch is a simple campfire ignited directly on a log.

However, because of its style in harmony with nature and its wildness, it is now a popular outdoor item for camping.

The name “Swedish torch” probably leads most people to think. “Is this a bonfire that originated in Sweden?”

In fact, it is the neighboring country of Finland that is said to be the place of origin of the Swedish torch.

The Swedish torch is said to have originated from the bonfire, which has been used in Finland since ancient times.

In Finland, the bonfire is called “Kokko”.

Midsummer is celebrated every year in Finland with a festival called Juhannus. During Midsummer, a large bonfire is lit on the shore of a lake to celebrate the arrival of summer.

Originally born in Finland, the bonfire was later introduced to Sweden.

The name “Swedish torch” became widespread during the Thirty Years’ War, a religious war fought mainly in Central Europe from 1618 to 1648.

At that time, Sweden was also involved in the Thirty Years’ War, and Swedish soldiers used torches to keep warm on the battlefield.

The bonfires that the soldiers surrounded came to be known as Swedish torches, and they spread to various parts of the country.

For more information on Juhannus (Midsummer), see this page.

The Swedish torch has become popular in Japan as a natural-flavor bonfire, mainly for camping and other outdoor activities.

At campsites, you can easily use it as a campfire by putting wood chips or newspapers in the slit as a fire starter and lighting it.

Depending on the size of the log, a typical 50-cm-high Swedish torch will burn for roughly two to three hours.

In camping, the Swedish torch can be placed on the ground and burned as a campfire, or it can be used as a bold cooking device by placing a pot on a flat surface at the top.

The balance is unstable if placed on the ground as it is, so the key is to use it on a flat platform.

How to make Swedish torch

On the other hand, those who want to be more particular and are good at DIY can buy logs sold at specialized stores and use chainsaws and saws to create a handmade Swedish torch.

The logs are mainly made of cedar wood.

Cedar wood is especially favored because it is soft and dry, easy to ignite, and above all, easy to obtain.

The process of making a Swedish torch is simple: multiple cuts are made vertically into the log with a chainsaw or saw to a depth of about an eighth of an inch.

The slits allow oxygen to reach the inside of the log, allowing it to burn for a longer period of time.

Two or four slits are commonly made.

A smaller number of slits results in a less efficient inflow of oxygen and a smaller fire, but instead, the fire burns for a longer period of time.

In contrast, a large number of slits allows a large amount of air to enter at once, resulting in a large fire.

Whether you want to enjoy a quiet bonfire individually or gather around it with a large group of people like a campfire, make a Swedish torch for the occasion.

The Swedish torch, which is said to have originated from a Finnish bonfire, became famous when Swedish troops used it as a bonfire during the Thirty Years’ War in the 17th century.

It is a different way to enjoy a bonfire than a regular campfire, which is enjoyed by lighting a fire directly on a single log.

When lighting Swedish torch fires in campgrounds, please remember to be safe and follow the rules of the campground regulations to extinguish and dispose of the fire properly.