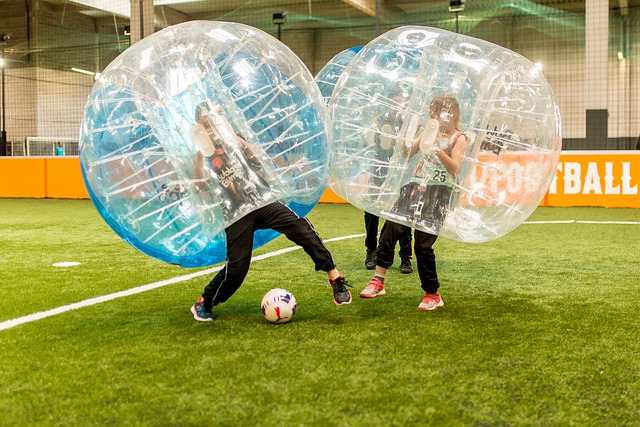 “Bubble Soccer” is a sport that has exploded in popularity overseas and in Japan in recent years.

It is a very unique sport in which soccer is played with a giant plastic ball filled with air inside and covered from the upper body.

Bubble Soccer originated in Norway and originally started as a variety show project.

In this article, I will explain Bubble Soccer, a unique sport in which people play soccer equipped with a bubble ball.

“Bubble Soccer” is a Norwegian-born soccer game played with a large plastic bubble ball covered from the upper half of the player’s body.

In the center of the bubble ball, there is a tubular cavity for one person, and the upper body is passed through the cavity and the bubble ball covers the area around the body.

The hollow wall has a backpack-like shoulder strap and a hand-held handle, so stability is not a problem.

The bubble ball has a diameter of 1.5 meters, which is large enough to completely fit an adult.

Depending on the ball, it also weighs between 8 and 13 kg.

As for the rules of Bubble Soccer, which will be explained in more detail later, they are basically the same as the rules of futsal, except for the unique feature of wearing a bubble ball.

The other difference from soccer is that, as in rugby, players are allowed to hit an opponent with a soccer ball with their body.

However, the attached bubble ball absorbs the shock, so there is little risk of injury from tackling.

Therefore, Bubble Soccer is not a full-fledged sport, but rather a sport with a strong communicative and recreational element that relieves stress and allows everyone to have fun together.

Originally from a Norwegian variety show

Bubble Soccer was born in Norway, one of the Scandinavian countries with a fascinating natural environment created by glaciers.

The birth of Bubble Soccer was triggered by a variety show called “Golden Goal” that was broadcast in Norway in 2009.

At the time of its broadcast, Bubble Soccer was featured as one of the projects of a variety show.

After the broadcast, Bubble Soccer spread through video-sharing websites and quickly became famous for its uniqueness, which overturned the previous concept of soccer.

And so Bubble Soccer, which first appeared on Norwegian sports variety shows, spread its fame from Norway to the Nordic countries and Europe.

A sport that has gained worldwide attention

Born in Norway, Bubble Soccer is a relatively new sport that only emerged in the 2000s.

Nevertheless, it has become a hot sport with a growing number of competitors around the world today.

The popularity of Bubble Soccer has spread to Norway, other Scandinavian countries, Europe, and the United States, and Bubble Soccer teams have been formed in many countries.

Bubble Soccer arrived in Japan around 2014, and Bubble Soccer matches are frequently held in metropolitan areas such as Tokyo and Osaka.

An international organization called the International Bubble Football Association (IBFA) has been established for Bubble Soccer, and it is said that a Bubble Soccer World Cup is planned for the future.

Anyone can enjoy it, regardless of ability or gender

One of the main reasons that Bubble Soccer has become so popular around the world in such a short period of time is that it is a sport that can be enjoyed by anyone, regardless of athletic skill, gender, or age.

Bubble Soccer is a unique style of soccer played by wearing a bubble ball that is difficult to control.

As a result, differences in player physique and ability are less apparent than in other sports.

Another reason for its popularity is its low threshold, which allows anyone to participate equally, regardless of whether they are male or female, or whether they have played soccer before or not.

Because the barriers to participation are low, it has been embraced by a wide range of people, from corporate sports clubs to local communities, as a recreational activity to deepen friendships.

In addition, for safety reasons, only people who are at least 150 cm tall and weigh 90 kg or less are allowed to wear bubble balls.

While there are restrictions to participate, Bubble Soccer can be enjoyed by anyone of any standard body type, young or old.

Furthermore, children’s bubble balls, which can be worn by toddlers and elementary school students alike, have recently become available, allowing anyone from children to adults to participate in Bubble Soccer.

Bubble Soccer does not yet have a strict set of rules, and each country or governing group has its own rules that vary slightly.

However, the rules are basically similar to those of Futsal.

Bubble Soccer players are called Bubbleists, and each team consists of four to five players. One of them is the goalkeeper.

And the first big excitement in Bubble Soccer is the powerful signal to start the game, also known as the Bubble Attack.

A Bubble Soccer match of approximately 10 minutes begins with a Bubble Attack, in which participating teams from both sides of the court simultaneously rush toward a soccer ball placed in the center circle in the middle of the court.

Bubble Soccer has an image of being a recreational, casual, free-flowing game, but of course, like any other sport, there is foul play involved.

“Head In,” where the ball enters the cylindrical cavity of the bubble ball. Other prohibited and illegal acts include “Bubble Bump,” which is an intentional physical contact with an unrelated opponent who is not in possession of the ball.

Tips for playing it safe

Bubble Soccer is a bubble ball that covers the entire body and serves as a cushion.

Therefore, even if you are hit by a body or roll on the ground, you can safely enjoy yourself without being injured by the impact.

As a precaution, the bubble ball is a balloon made of vinyl and may burst if a metal object with a sharp tip gets stuck in it.

So, before Bubble Soccer, jewelry items such as earrings, rings, and watches should be removed for safety reasons.

For those who are not comfortable with the idea of playing a game out of the blue, a variety of other games are available in addition to Bubble Soccer.

Bubble Sumo,” which is played by pushing the opponent out of the ring, is one such example.

Other recreational activities such as “Bubble Royale,” which is not a battle royal but rather a “bubble royal” in which all players push each other around the court to get their opponents off the field, have also become popular.

In this way, your body will gradually become accustomed to the sensations of the Bubble Soccer ball, and you will be ready for the real Bubble Soccer game.

Bubble Soccer, which originated from a sports variety show in Scandinavian Norway, is a game in which players wear bubble balls and chase after the ball.

Bubble Soccer can be enjoyed not only by the players themselves, but also by spectators, who can see unexpected movements.

Bubble Soccer is a great way to lose weight and relieve stress, so if you have the chance, give it a try.

Lingonberry: An essential berry in S...