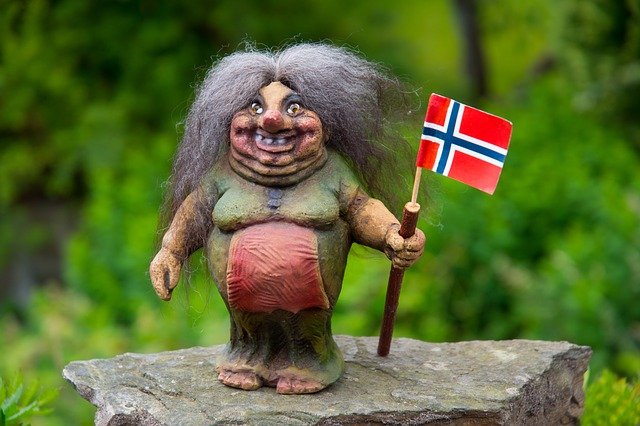 The troll is a fairy of Norwegian origin. Also known as trolls in Japan, they are one of the main monsters in games and fiction.

In this article, I would like to introduce in detail the troll, a character known around the world, especially in Scandinavian Norway.

Many people are familiar with the Troll, a character that has appeared in numerous fantasy films, novels, and even video games.

In fact, trolls originated in Norway, in Scandinavia, and are fairies in old folklore.

The myth and folklore of trolls are widely known to both children and adults in Norway, and they are one of the most familiar characters to the Norwegian public.

There is also another world-famous tourist attraction in Norway called “Troll’s Tongue,” where rocks stick out like tongues on a precipitous cliff.

For more information on the Troll’s Tongue, please refer to this article.

When we imagine “trolls,” we probably have a general image of them as monsters with big ears and noses, ugly appearances, and rough personalities that misbehave with people.

Even in Norway, the home of trolls, there are various types of trolls depending on the medium in which they appear.

However, the general appearance of trolls in Norway is designed to be quite realistic compared to Japan, with a long red nose, tattered clothes, and a hairy, ugly appearance.

Norwegian trolls, also known as ogres, are man-eating giants that destroy crops in the fields and misbehave with people.

On the other hand, they also seem to have a positive side, giving away their possessions to people they like.

There are many different types of trolls, ranging from ugly, hairy designs true to old folklore to cute, deformed versions for children, such as those in Disney movies like Frozen.

Originating in Norwegian folklore, the troll spread throughout the Scandinavian peninsula over time.

As trolls spread to different countries and regions, they branched out into different forms, just like dialects, in terms of appearance and personality.

Now an integral part of the fantasy world

Trolls originated from Norwegian fairies, but today they are mainly known as monsters that appear in fantasy stories.

They are well known not only in the Scandinavian countries, but also in Japan, Asia, and Europe.

Trolls have also appeared in the Harry Potter series by J.K. Rowling and the Dragon Quest series as large monsters equipped with a piece of cloth and a club.

Thus, trolls are depicted in all kinds of movies, novels, and games as enemy characters.

It is also well known that “Totoro” in the Japanese Ghibli film “My Neighbor Totoro” is actually based on a Norwegian troll.

The “Moomin” are also based on trolls, although their design is very different from the trolls commonly associated with Norway.

The trolls of Scandinavian Norway may not be the most adorable-looking creatures, more akin to monsters than fairies.

In fact, however, they are so beloved in Norway that they are sold as mugs, T-shirts, and souvenir figurines in many stores.

The Troll's Tongue: A spectacular sp...