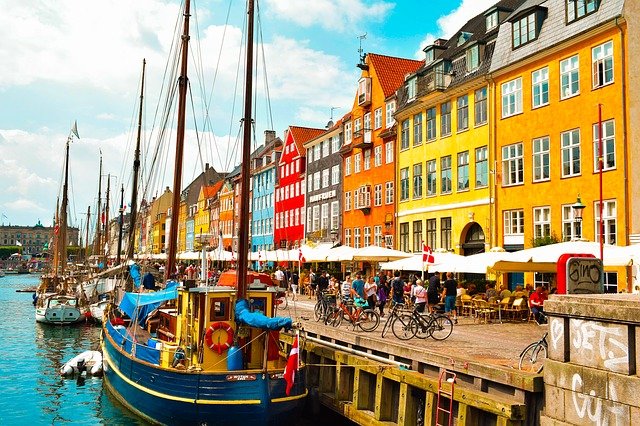 Nyhavn is a port town in Copenhagen, the capital of Denmark, and a popular tourist destination with colorfully clad houses along the canals.

Hans Christian Andersen, the Danish author of “The Hard Duckling” and other famous fairy tales, loved the fairy-tale-like scenery of Nyhavn and lived there until the end of his life.

In this article, I will explain Nyhavn, Denmark, which is also the oldest populated port in Scandinavia, built in 1673.

Copenhagen, the capital of Denmark, has a port town called Nyhavn.

Nyhavn is a populated harbor, 30m-40m wide and 400m long, created by excavation work in the 17th century.

It is the oldest demographically created port in Scandinavia.

Nyhavn, which means “new harbor” in Danish, is also characterized by its colorful buildings with red, yellow, and orange exteriors.

Nyhavn is one of Denmark’s most popular tourist destinations, with a photogenic scene that looks like something straight out of a fairy tale come true, and that you can’t help but capture with your camera.

Perhaps you have never heard of Nyhavn, but you have seen the colorful streets that are the symbol of Nyhavn somewhere before.

This is no wonder, as the streets of Nyhavn are often chosen as photographic material for advertising photos in guidebooks and on TV when introducing Denmark and Copenhagen.

The town where Andersen lived

Denmark is also famous as the birthplace of Hans Christian Andersen, the author of many famous fairy tales, including “The Little Mermaid” and “The Ugly Duckling.”

And Nyhavn is also known as the town where Andersen lived at the time of his debut and in his later years.

Andersen spent much of his life in Nyhavn and has three residences there.

His first residence was “Number 20” in Nyhavn, where he is said to have written Andersen’s first collection of children’s stories, “The Tinderbox.”

Also, “Number 20,” with its red exterior walls, is where Andersen lived when he published his first collection of fairy tales.

Today, it is a famous landmark visited by many fans and travelers from home and abroad, with a plaque embedded with Andersen’s name.

The history that Nyhavn has followed

Nyhavn was built more than 300 years ago, in 1673, by the then King Christian V of Denmark as a populated port.

Construction began in 1671 for the purpose of expanding Copenhagen’s urban area and was completed two years later in 1673.

Nyhavn was founded in the 17th century, and at that time it enjoyed great prosperity as one of Denmark’s leading trading and commercial port towns, visited by many foreign vessels.

It was also a hub for shipping in Copenhagen, and at the same time, it was a lively entertainment district where sailors gathered after their voyages to toast each other with drinks.

However, Nyhavn, which had been a central port town for Danish logistics, gradually declined over time.

With modernization, the mainstay of logistics shifted from traditional sailing ships to railroads, which are more powerful and efficient.

With these transitions, fewer and fewer ships used Nyhavn’s harbor, and the town lost its former vitality.

To remedy this situation, a plan was launched in 1973 by the Sailing Ship Association and the City of Copenhagen to restore Nyhavn as a historic district.

This proposal has transformed Nyhavn from a traditional port town into a new tourist destination with colorful streets and commercial facilities.

Today, it is the most vibrant area of Copenhagen and is as prosperous or more so than when it was built in the 17th century.

Nyhavn is one of Copenhagen’s most popular tourist destinations, with numerous cafes, restaurants, and stores where you can buy Danish souvenirs.

Along the canal, brightly colored wooden houses, designed in the 18th century and emblematic of Nyhavn, stand side by side.

In the late afternoon, people taking coffee breaks on the open terrace of the café are a familiar sight.

Incidentally, it is said that the reason for the colorful exterior of the buildings in Nyhavn is that the sailors who lived in Nyhavn in the past painted their houses in colors as landmarks so that they would know where their houses were.

The residence, with its blue exterior, was built at about the same time the New Town was completed in Copenhagen.

The building is over 300 years old and is truly a storyteller of Nyhavn’s history.

A leisurely walk along the canal with a view of Nyhavn’s cityscape is a good choice, but cruise ship tours on the canal are also available to enjoy the view of Nyhavn from a different angle.

Other cruise ship tours include a canal tour of the “Little Mermaid Statue,” a bronze statue based on Andersen’s fairy tale “The Little Mermaid,” and Amalienborg, the residence of Denmark’s royal family.

When you travel, be sure to take advantage of this option as well.

Nyhavn, the port city of Copenhagen, is a beautiful scene of gently flowing canals and colorful streets.

You could spend all day exploring the area with a camera in hand and never get tired of the scenery, which seems to be a fairy tale come true, having captured the heart of Hans Christian Andersen.

Snow Hotel: A Mysterious Hotel in No...