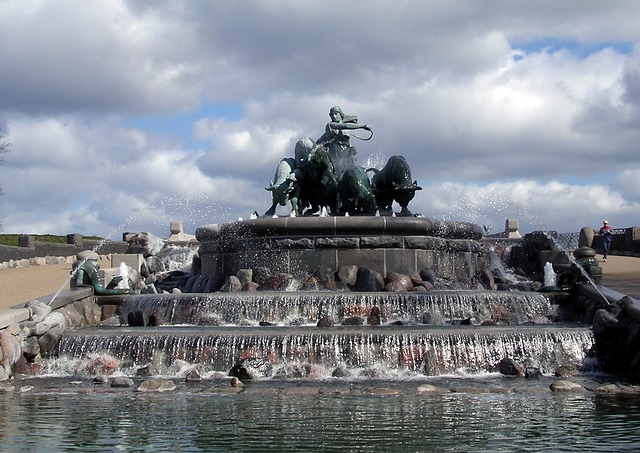 In Copenhagen, Denmark, there is a spot called Gefion Fountain, based on the legend of the goddess Gefion from Norse mythology.

The spot is more enjoyable if you study Norse mythology about Gefion beforehand.

In this article, we will introduce the Gefion Fountain, a landmark in Copenhagen, Denmark, which has its origins in Norse mythology, along with the Norse mythology of Gefion, the motif of the fountain.

What is the Gefion Fountain?

Gefion Fountain is a fountain built in the legend of the Norse goddess Gefion.

A dynamic and powerful bronze statue of the goddess Gefion Fountain towers over the cool fountain, about to strike four cows with a whip held in her hand.

It also features a powerful fountain that spurts water with a roaring force. On the other hand, at night, visitors can enjoy the fantastic sight of the fountain illuminated by lights.

This Gefion Fountain is located in the city of Copenhagen, the capital of Denmark.

Copenhagen, Denmark, is a port city that has long flourished as the gateway to Northern Europe, and canals run throughout the city.

It is also the hometown of Christian Andersen, the world-famous author of fairy tales such as “The Little Mermaid” and “The Hard Duckling.

In Copenhagen, you will find a beautiful cityscape that looks as if it has stepped out of a storybook.

The spectacular appearance of the Gefion Fountain also has a reputation for being a perfect match for the Copenhagen landscape.

About Gefion, a goddess in Norse mythology

The Gefion Fountain originates from Gefion, the goddess of fruitfulness in Norse mythology, which has been passed down through the ages in Norse countries.

Gefion is known in Norse mythology as one of the goddesses belonging to the Earth Gods, a tribe headed by the supreme god Odin.

The Gefion Fountain in Copenhagen represents a scene from the story of Gefion, who acquired her vast Swedish lands by transforming her sons into oxen and making them work for her.

Spot is based on the legend of Gefion

The Gefion Fountain was designed and modeled after a story from Norse mythology.

The story goes that after the King of Sweden promised to give her the Swedish land she had plowed in one night as new land, she transformed her four sons into oxen and continued plowing the land, eventually creating the island of zealand in Copenhagen.

In more detail, Gefion first went to King Gylve of Sweden to find a new land under the direction of King Odin.

There, Gefion is told by King Gylve that he will give her as much land as she can cultivate in one night.

Gefion then visited Jotunheim, a country inhabited by giants, where she had four boys with giants.

She then transformed her own four sons into the form of fierce oxen and led them to plow the land.

It is said that the island so acquired was Sölund, now Zealand in Copenhagen.

Also on display in the murals of Frederiksborg Castle in Denmark is a painting depicting Gefion plowing the land with four oxen in tow.

The Gefion Fountain can be enjoyed more deeply if you study the Norse mythology about Gefion and the four cows in advance as a preliminary study.

The area around Gefion Fountain is also home to some of Copenhagen’s most famous sites, such as Kastellet Fortress and St. Alban’s Church, making it a great place to stop by during your visit to Denmark.